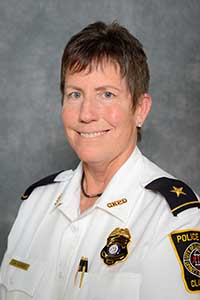 In February 2005, Hudson was recruited to go to Baghdad, Iraq to train the Iraqi Police. While there, Hudson became a Team Leader to American contractors who worked with the Iraqi Major General in charge of Iraq Internal Affairs.

Hudson began her tenure with the City of Clarkston in 2009 as a Lieutenant, was promoted to the rank of Captain and then promoted to Chief of Police in January 2012.

Chief Hudson has spent her career serving others and has a particular passion for those who are disadvantaged by their circumstances. She has developed a reputation for being unafraid to stand up for defenseless victims, especially victims of family violence.